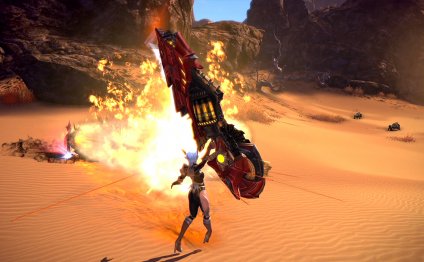 2014 brought a lot of changes to TERA . We introduced a new class in the reaper, new dungeons and gear in Wounded World and Fate of Arun, and pushed our level cap out to 65. We also killed a lot of BAMs, held our first Skyring Slam tournament, and our third Canyon Clash tournament. But 2014 is behind us now, and it’s time to talk about 2015.

First, let’s talk about the next additions to Fate of Arun. What’s better than storming a castle? Having a castle of your own, in the sky! We are introducing a new guild competition that lets guilds not only battle it out for top ranking, but also earn guild housing.

In the sky, where everyone can see it!

The competition has two methods for obtaining ranking points: one that is PvP-focused, and another that is PvE-focused. After the season is over, the top ten guilds on each path will claim their Skycastles (twenty castles, for twenty guilds altogether). Once your guild earns a Skycastle, you can then customize it and use your very own Pegasus master to get there.

That’s not all, though. A new instance - Sky Cruiser Endeavor - launches with both normal and hard modes, and some of our toughest bosses yet! Tier 6 gear selection expands, with Generation and Renegade equipment serving as the top tier. And you’ll also be able to “awaken” your gear and enchant it to +15. Only a few sets are eligible for awakening, but not only will your gear become more powerful, your weapons are going to look badass with their fiery wings.

All this lands on our shores by the end of February. So is there more? Yes!

As with most big patches, this one will have further class balance and dungeon changes. We will also be debuting the 5v5 version of Champions’ Skyring! It has both a solo queue equalized version and the standard team queue to serve in addition to the 3v3 queues.

Ok. Now that we’ve established what’s coming in February, I’d like to talk a little about timing and why February. We talk a lot about localization, but translation isn’t the only thing that happens for a patch like this to come over to North America (I wish it was). A lot has to change to make the game fit our needs, and those of our players. For instance, the GvG system for the Skycastles would only have been possible on PvP servers, because there are no strict PvE servers in Korea. In addition, we use different backend structures such as the account system and stores outside of the game that need to work together.

These, and many other things have to be changed just for us. As for our communication of the process—yes, it has to get better, and it’ll start with me. There’s a lot of community aspects we can improve on overall, but here’s what we’re going to do to start.

First, I’ll be joining Tonka on our Twitch streams more often—we’ll aim for a once-a month schedule for now. Some months I will be going over the next patch, and others I will just be answering questions while running instances or battlegrounds.

Next on the list are regular updates about community and game issues. The exact format isn’t finalized yet, but we’ll look to keeping you updated weekly. Specifically for Fate of Arun, part 2, we are publishing a series of posts that will expand on the guild competition, Skycastles, and the awakening system mentioned above.

Lastly, something that has less to do with communication and more with community. We will keep on sharing our community event plans for upcoming months, and this year you’ll see a commitment to running smaller-scale events more frequently. This means more egg thief-type events, buff events, and hunting events to keep things interesting. We’re also holding our first community costume design contest, which will generate an in-game costume! Details on this, and more exciting community events are coming soon.

And there’s a lot more TERA to come in 2015! The Dreadspire opens in March, a brutal tower arena where your nightmares come to life. Skyring Slam 2015 is also happening, and this year in the new 5v5 arena. And on the horizon, a new, (very big) gun-toting class!