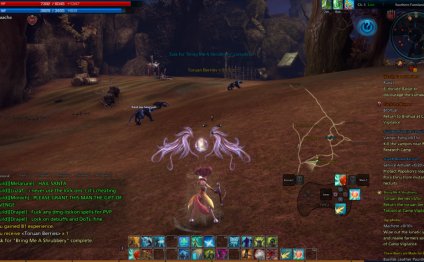 Allemantheia is the capital city of the high elves, founded centuries ago in the wake of the Divine War. Originally sustained by the “Flower of Life, ” the city was nearly destroyed during an internal schism over whether imperialism or capitalism was the best way to restore order to the rest of the world.

The Flower of Life itself was so badly damaged that it threatened to lay waste to the world, and so the elves devised a kind of containment vessel for its power: the Core. Now the Core sustains Allemantheia, not only allowing it to thrive amid the blistering desert of Southern Shara, but also providing the high elves with near limitless arcane energy.

Aside from the magically-inclined, the most common visitors to the city are heroes, summoned by Fraya from her command center in the Allemantheia Headquarters (“Fraya’s Fury”). Likewise, Ryshan frequently looks outside the ranks of the Mysterium for heroes to conduct various investigations (“To the Garden of the Sun”). Expect to see them many times before you’re done with Allemantheia.

Because the city is largely self-sustaining, and the high elves who live there keep to themselves, most trade in Allemantheia is conducted with outsiders taking advantage of the oasis atmosphere to transfer goods shipped to or from the north. For heroes looking for supplies, most merchants can be found in the Agora, and the Pillar of Eons is a hub for the city’s trade brokers.

The city known for its magicians understandably trades primarily in magic, as well as knowledge both arcane and mundane. The Arcane Symposium is particularly popular with priests, mystics, and sorcerers seeking further training.

For more physically-inclined heroes, Allemantheia offers the Martial Symposium as well. And between the Symposium of Artisans and the merchants of the Agora, heroes can find numerous opportunities to hone their crafting skills.

You just landed in Allemantheia. Here’s the fastest way to…

Allemantheia unfolds itself the more you explore, so here are some tips for seeing the best parts, without missing anything.

TERA - Teach Me How To ARCHER

First, I want to say thanks to Yosha, Renai and Pikashuu for awesome guides and various information I needed as Tank/Lancer…