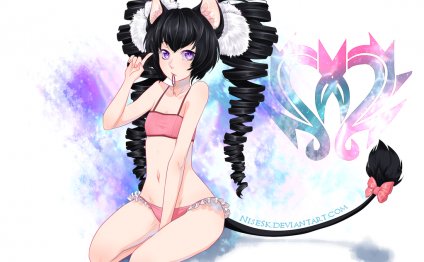 The elins have one driving goal: if it’s not good for nature, stop it. Older and wiser than they appear, they join with forces of nature and mortal races to sweep their enemies from the battlefield. Their speech is often dark, forthright, and otherworldly, and their sense of humor can border on vicious. Other races find the elins' manner and behavior off-putting.

Building corporeal forms around tiny fragments of her own divine being, the goddess Elinu created the elins. Their physical appearance reflected the youngest daughter of Arun's naïve desire for beauty and peace. An elin queen governs both the elins and the poporis, with whom they share a history and a mission. The queen and her forces have proven their wisdom and diplomatic prowess in peace, and their tactical and fighting prowess in war.

Both the elins and poporis champion the cause of nature, but the bond between them is deeper than that. As a single nation they repair, protect, and preserve the world they live in and love above all else. The Popori Kingdom was among the first to join the federation. Recognizing the Argon Invasion to be a threat to all nature, the elin queen promptly rallied all of her forces, popori and elin, to the cause.

When an invader attack caused an explosion in their city, Princess Rida forged the darkest of elin divine energy into vengeful spirits—the reapers.

Pora Elinu is not a large city, being wholly contained inside the trunk of a single tree, but it holds a large place in the elins' hearts. Pora Elinu stands as a tribute to the goddess and a pledge to always pursue her goals. When the elin queen has to deal with matters of state, she and her court are found in Pora Elinu, but usually she leads her forces in combat on the argon front.

Velik's Horn Any elin of sufficient level can teleport at will to Velika, the federation's capital. 1 hour cooldown. Soothing Presence If they move slowly and carefully, elins can sneak by monsters. 1 hour cooldown. Horizon Run Elins hate to waste time, and can speed up their movement out of combat. 30 minute cooldown. Botanist Their tight connection to nature helps elins to gather plant resources faster than other races. Friendly Current Elins are at home in water, and faster than other races.