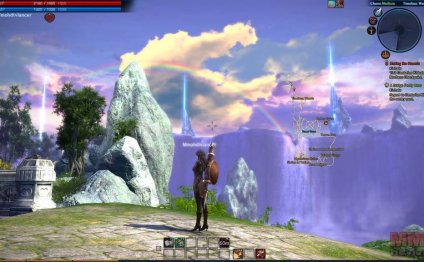 Keyboard or control pad? That's not a question I expected to be asked by a PC-only MMORPG. It's a genre I associate with hotbars; with gradual muscle memory and shaving seconds off cooldown response times, until your number-tapping refines into a visual beat of on-screen violence. A skill, to be sure, but not one that maps to the streamlined, movement-centred input of a 360 pad.

TERA asks the question almost as a point of principle. It's a declaration that its action combat is different. There's no auto-targeting or autofire: unless the blows of your melee class are connecting, or your ranged class is aiming accurately, you're not doing any damage.

It's a system that instantly makes sense. Avoiding attacks keeps you safe, making them wins you fights. How did we ever accept anything else? But where TERA innovates in one area, it remains painfully traditional in all others. And for a Korean-developed MMO, that means hours of grinding on monsters before you get even a whiff of combat at its most dynamic.

The eight classes map to the traditional MMO trinity, with a tank, two healers, four DPS (in ranged and melee varieties), and a tank/DPS mix in the Warrior. And thanks to an unexpected quirk of TERA's lore, it's vital that you get your class choice right first time. All seven of the playable races – from humans, to the effeminate High Elves, to the uncomfortably sexualised animal-children of the Elin – are allied into the Valkyon Federation. That means there's no race-specific starting area, so if you go back and roll a new character you'll have to slog through the same material. An opening tutorial does give you a level 20 preview of your class, but its haphazard delivery doesn't give a sense of how mid-level combat will play.

Whichever class you choose, when you arrive in the game proper you have two primary skills: attack on the left mouse button and a dodge or block on the right. What follows is hours of mindless hack and slash as you kill your way through the RSI stress test that is the starting area.

It wasn't until much later that I'd learned enough skills to experience the fluidity of the system. By level 16 my Slayer could perform the hyperefficient combo of charge, knockdown swing, overhead strike, dodge, four-hit attack, second overhead to finish. I may have had fewer skills than at the same point in most hotbar-driven MMOs, but TERA's classes are well defined and the attacks you get serve to complement your role. While there are no talent trees to customise your battle performance, crystals picked up from quests or shops can be added to your weapons and armour to customise your character around your fighting style.

Except that there's rarely a need to optimise your stats in PvE questing. Monsters telegraph their attacks so slowly that moving out of the way becomes trivial. Hits only connect when you're waiting for the dodge skill cooldown to reset. It was at level 19, around 14 hours into the game, when I finally died for the first time. Not through a prolonged and difficult battle, but because I'd ill-advisedly walked up to a massive boulder-looking thing, given it an exploratory smack with my sword, then watched as it unfurled into a giant spider and instantly pummelled me into oblivion.

Questing with Elin feels more like running a creche than a dungeon.

To get the most out of the combat system you'll need to be on a PvP server. From level 11 onwards you learn a skill that lets you declare as an Outlaw – allowing you to attack players at will, but also broadcasting to everyone in view that you're a threat, thus prompting a mass pile-on from nearby players.

In reality, PvP is geared towards existing groups. There's a team deathmatch that lets up to 10 people per side fight it out and bet on the outcome. Unfortunately it's inviteonly, and could sorely use some matchmaking in order to give solo players an easy way in. Currently the best way to get involved in player battles is the Guild versus Guild system, which lets leaders declare war on each other, giving guild members the opportunity to duke it out without the fear of retribution from onlookers.

In the height of quest grinding it's easy to miss another of TERA's notable features: how good it looks. The view of the world around you can be sumptuous, easily seen when you take a flying horse to a new area – it sweeps around your departure point strategically to highlight the best views.

Wow, I bet that massive boss is hard to kill. Not really, no.

On the ground it's less impressive though. Not because the fidelity is any worse, but because the game spends so much of its early hours giving you grassy plains filled with bland-looking critters. In terms of moment-to-moment splendour, Aion was both more striking and more alien. The netcode can also struggle to keep up with Unreal Engine 3. Creature pop-in is noticeable, and having to go out of your way to look for monsters makes for annoying detours.

You soon settle into the rhythm of discovering an outpost, hoovering up the available quests, before heading out into the wilds to massacre everything that moves. After The Old Republic, where a sense of story meant I listened to the most trivial mission instructions, TERA had me fall back into the old habit of not reading a single line.

None of this is fun. Uninspired quests, unchallenging enemies and uninteresting story delivery make you engage gaming autopilot. It's still strangely compelling, in the way that any super-grindy MMO is, as the slow tick of levels and better equipment appeals to some carnal desire for bigger numbers. In order to make it through this phase I took to playing old DVD boxsets in the background. I derived no enjoyment from TERA for about 21 episodes of The West Wing.

Just because there's a war on is no excuse not to look fabulous.

Since starting development on Fable Legends, we’ve had two clear goals in mind. First and foremost, we’re aiming to create…