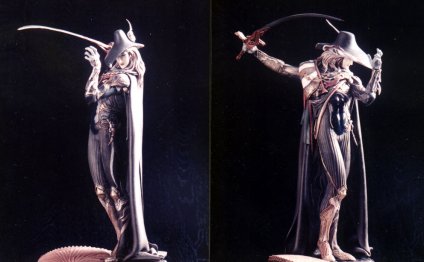 Saleron’s Sky Garden is TERA’s ninth instanced dungeon, aimed at level 55 characters but available to any level 53–58 character through Instance Matching. It’s a respectable size at five boss fights—and with three of the five fights spawning a random boss, it has a lot of replay value. With eleven possible bosses, every run will be different.

The god Saleron won’t give his powerful relic to any mortal who can’t protect it. Prepare to be tested.

You can enter the Sky Garden at level 53, but its story builds on the Danger in Kaiator plotline that starts at level 50.

The goddess Kaia, realizing that Killian and the god Thulsa were baiting her, sent you to Sylvanoth to disrupt their plans.

You recovered Isrenia, the intelligent and powerful staff of the goddess Isren, who revealed Thulsa’s plan: to transform the mighty, sleeping god Sikander into a horrible monster under Thulsa’s control.

You battled past hordes of Thulsa’s and Killian’s minions, then through armies of Sikander’s loyal followers. Despite your heroic efforts, Thulsa awakened Sikander in a corrupt form: Kelsaik, harbinger of annihilation.

However, you disrupted the ritual enough to put Kelsaik beyond Thulsa’s control. The goddess Kaia suggested that Saleron, an ancient god imprisoned in Val Elenium, might have a relic powerful enough to dispatch the rampaging Kelsaik—but you’ll have to find it before Thulsa and Killian do.

This section will get you past the quests and encounters leading up to Saleron’s Sky Garden and help you survive them. Players like you, drawing on extensive in-game experience, developed these tactics, but they don’t guarantee success. As with all things TERA, you’ll need skill and a healthy amount of common sense to win—but these tips will help.

Tamur, Kaiator’s new commander, sends you to Fraya in Allemantheia for help finding Saleron’s prison. Though Fraya has doubts about Saleron, she directs you to a Mysterium investigator in Elenea.

Elvar explains Fraya’s doubts: Saleron is an old and powerful god who loathes other gods and mortals alike. Elvar guides you to a Mysterium camp inside the Doomcrypt, where Saleron is imprisoned.

At the camp, Legia introduces you to Torsten, Saleron’s mortal prophet. Killian has already visited Saleron, Torsten explains. Rather than give the relic to Killian, Saleron broke it into pieces and magically scattered them.

Note: Saleron is a hard god to talk to. If you have trouble highlighting him so you can speak to him, walk slowly along the Ebon Span about 20m below the Sky Garden teleportal and watch for the Press [F] prompt.

Saleron wants revenge on Killian, but Saleron won’t give you the first relic piece unless he’s sure you can keep it from Killian. Survive Saleron’s Sky Garden, and the relic piece is yours.

Garden In the Sky

The garden is simple enough: a single path from terrace to terrace. Looks like a cakewalk until you realize at least three dragons fly around up there. What else might Saleron keep in his garden?

Saleron has outfitted the garden’s four major terraces as the stages for your trials. Small terraces connect the larger ones and hold smaller challenges, often avoidable. After you clear the first big trial terrace, a second teleportal appears back at the instance’s spawn-in point. Use it to return to the furthest trial terrace you’ve cleared. If you take a break or your party wipes, you don’t have to hike the whole way back.

Crystals power the garden. Knowing how to handle them will empower you, too.

When you see a trio of werlyss, maelkul, and sdurgo crystals on a terrace, get ready for a big fight.

The first seeker shard calls up a mandrake chanter and an entourage of minions. That includes a ring of talpids around the edge of the field that knocks you down, so stay toward the center.

Focus your damage on the chanter, which appears by the exit to the next terrace. It spawns new minions until it dies, at which point all the minions and talpids vanish.

Head to the next terrace and use the three crystals there to buff up. The big terrace just ahead is your first real test: Saleron is going to pick through your memories for a suitable foe to bring back to life.

You face one of three bosses here: Karascha, Terkasia, or the duo of Duke Volperon and Duchess Tirania, selected randomly each time you run the instance. They’re not pushovers—Saleron has granted them new life and much more strength. Each boss spawns in a different part of the terrace’s far side. Gather your party by the entry gate—a decent position, whichever boss appears.

Akasha’s guard dog, back for more. He spawns across from the entry gate on the left side. Watch out for his leap attacks and fireballs at range—they cause a bleeding debuff that slows you and drains your health. Once Karascha drops below 70 percent health, beware his Words of Unmaking. The first two words are just warnings, but once Karascha says the third word, you have just ten seconds to defeat him before your party dies.

You faced Terkasia in the Cultist’s Refuge. Here she spawns almost straight across from the entry gate. Terkasia is slow, but she has several 360-degree attacks. When her torso spins, watch out for an electrical attack that shocks you and leaves you zapping any party members who come near.

The Sinestral Manor’s vampir rulers are back. They spawn on the far side near the exit gate. Kill Volperon first—once he dies, everyone else despawns. Watch out for his spin-kick attack, which comes with a curse that takes your health down 90 percent. Tirania can poison you and can also summon minions—focus DPS on them. She’ll usually pause a while after summoning them, leaving Volperon open.

Catch a speed boost from the zenobic crystal by the exit and head up. Your next engagement is optional—elite prion njalvars and helgevars patrol the platform, but their formation is loose. If you time your movement right, you can pass the prions without alerting them.

The seeker stone on the next terrace triggers another warm-up test: a sikandari priest and his brood of minions.