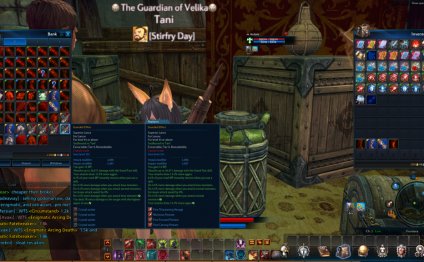 Sooner or later, everyone has a first day, be it at school or on the job. Thuul, a baraka archer, meets his new regiment and guards Kaiator as he fights off the argon invaders. As with many first days, Thuul learns a lesson - but he teaches one as well.

Thuul smoothed the feathers on each arrow as gently as he could, a task made more difficult by his massive, battle-hardened fingers. Those fingers were practiced enough to not require Thuul's eyes, which instead gazed down at the wreckage of the last day's battle. And the last week's battles, and the last year's battles. The federation can't seem to seize the valley. At least the argons can't seize it either.

A far more graceful hand patted him on the shoulder. "Leave the arrows for now, Thuul. You're supposed to be off duty, and I want you rested for night watch." Thuul'scastanic sergeant grabbed an arrow from the ledge, smoothed out the fletching with three quick swipes of his fingers. "You're no good to me drowsy. Besides, barracks time will let you get to know your new comrades."

The castanic raised an eyebrow halfway up his head and broke out into a grin. "Maybe things are different on the home front, but we don't have a lot of libraries up here..."

"You'd like him, sir. Bruhn was a hero to my people in the early days-after the giants were gone and we baraka had to make our own way in the world. He was no librarian, but a peerless archer. Bruhn was one of the first baraka to demonstrate that we could be more than scribes and bookkeepers."

"Fascinating, " the sergeant said, failing to suppress an eyeroll. "And this Bruhn told you that fiddling with arrows was more important than making friends in your new outfit?"

"Not in so many words, sergeant. But the Third Tenet of Bruhn says simply: 'You cannot improve the arrow once it leaves the bow.'"

"That's either deeply profound or completely wine-addled, Thuul. How many tenets does this Bruhn have?"

The castanic raised both palms in front of him. "No, no, that's all right. Ten more minutes out here, and then I'm ordering you to make some friends in the barracks. We might not be as scholarly as you, but when you're stationed on the wall, you tolerate your mates or you go crazy."

Ten minutes later, Thuul descended the battlements to the barracks. And ten minutes after that, he was lumbering back up the stairs again, responding to the bugles that warned of imminent attack. A quick glance from the crenellated wall showed argons snaking through trenches and craters on the valley floor, their sleek bodies emitting an ominous cyan glow. I'm learning to hate that color, but it certainly makes archery in the twilight easier. Further down the line, the sergeant shouted "Fire at will, mates! Stay in our arc!" Thuul fired arrow after arrow, picking off argons one by one as they strode closer.

A voice, amid the tumult: "You're shooting quickly, Thuul."

"Is our arrow supply limited, sergeant?" Thuul asked out of the left corner of his mouth, his right cheek held immobile by the bowstring and arrow.

"Fourth Tenet of Bruhn, sir. 'The arrow left in its quiver never hits.'"

Thuul braced himself for an imprecation from the sergeant-castanics have an impressive set of vulgarities-but he was running down the line, pointing at something below. "War machines, mates. Get them before they're in range!"

Thuul's bow tilted skyward, and each arrow made a graceful parabola before falling amid the armored monstrosities crawling toward the ramparts. These arrows are no good against such a machine. But even argon machines must have crews...I hope.

The war machines paused in the center of the valley.

We didn't hit every crew member on every machine in the same moment, so why are they all pausing...? Thuul ducked behind the wall just before flames crashed against the battlements like waves from an angry sea. Third Tenet of Bruhn, Thuul thought. An arrow makes a poor shield.

Thuul's comrades weren't all so fortunate. Some simply fell backward, their bodies a charred ruin. Others writhed on the flat top of the wall, screaming for healers.

First Tenet of Bruhn: The archer's eye is on the target. Thuul rose from the crouch and kept shooting, slower now, charging each arrow with magical force, then releasing it with the gentlest twitch of his fingers. Each arrow made a crimson arc as it sped toward the war machines. Through the shadows in the valley, Thuul could see movement among them, but he couldn't tell what kind of movement.

The sergeant's voice again: "That's it, Thuul! Make every shot count-those things take a long time to reload!" Then he, too, was shouting for healers to tend to the burned archers.

Silver-blue forms-running on all fours, I think-sprinted from deep in the valley straight toward the battlement, moving faster than the swiftest horse. "Runners, sir!" Thuul shouted out of the corner of his mouth as he took aim at an empty spot in front of him. Second Tenet of Bruhn: Aim not at the target, but aim at where the target will be.

The sergeant was back at Thuul's side, shooting his own bow at the argon sprinters. After a moment's shooting, both Thuul and the sergeant found themselves grinning. When hit, each argon would fall in a clumsy tangle of limbs, often knocking over one or two other argons. "Keep it up, mate, " the sergeant said. "Keep the last few off the wall!"

Casting aside his empty quiver for a spare, Thuul peered into the gloaming, desperately willing his eyes to pierce the darkness. Then his bow snapped upward and he barked at the sergeant: "One breath, then shoot at the war machines-sir."

Thuul charged up an arrow with all the magic he could muster, then sent a glowing shaft as deep into the valley as he could. Thuul hit nothing, but the glow from the arrow's magic revealed metallic forms crawling across the surface of the the war machines. The sergeant's arrows started picking them off a moment later. The duo worked like clockwork until the argons retreated later that night, with Thuul's arrows casting enough light for the sergeant's arrows to hit.