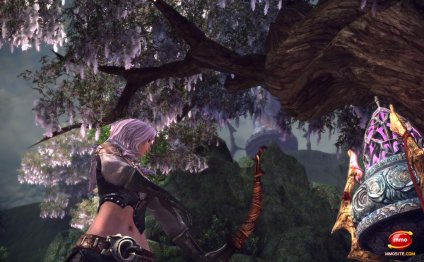 Players can arrange their characters on the server according to their own preferences. We streamlined character creation to a single screen experience. We increased the maximum character slots on each server to 16, regardless of account type. Basic accounts still begin with two slots per server, Founder accounts with eight.

The Fate of Arun update introduced a whole new continent to the world of TERA, including the province of Val Oriyn: Savage Reach, Spring Valley, Highwatch, Ex Prima, and Arx Umbra. Exploring this previously unavailable part of the world takes characters from level 60 to level 65, rediscovers the long-lost homeland of the barakas, and ultimately brings characters face-to-face with the dread archdevan, Dakuryon.

Starting at level 13, characters now have access to a number of quests designed to help them level up faster and more efficiently. There’s no need to seek them out—these quests are automatically granted according to a character’s level and appear on the quest tracker when you complete an objective.

You can view all these quests through the Initiative Requests window [], allowing you to receive rewards for completed quests, teleport to quest locations, access help files, and even link to Instance and Battleground Matching.

Guild PvP system to the next level—and to the skies! Guilds can crusade in either the Cutthroat League (PvP) or Challenger League (PvE) to compete for the most prestigious honor of all, a fully customizable Skycastle. Crusade points are earned by completing league activities, such as battlegrounds, GvG Battles, and dungeons. At the end of each four-week season, the top ten guilds in each league earn a Skycastle—and then must repeat their success to keep it!

TERA implemented a Buddy-Up system, allowing experienced players to generate a code for their friends’ new characters (under level 9) to use and granting both players special gifts as the new character levels up.

Article A look at the top 10 mounts in MMORPGs in the very first edition of our new weekly column all about lists, Listed…