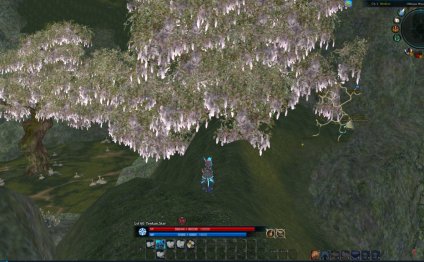 The Scions of Lok have concentrated their forces in a remote desert temple, where they plan to resurrect fallen allies and unleash a terrible power on the Valkyon Federation.

While the dungeon proper is accessible to any character level 35 or higher, to get the full experience you'll want to follow the Samael's Apparition plotline. This group of quests begins at level 35 in the Val Aureum city of Tulufan, leading you through ancient ruins and challenging opponents.

Commander Seir recalled you to Velika to join Elleon's task force investigating rumors of Scion activity in a temple near the city of Tulufan. The Scions of Lok were seeking the power of the legendary giants, but your quick thinking and strength of arms foiled their plans.

You weren't done yet, though, and were quickly back in action recovering an artifact that would allow them to try again. In the process, you killed some of their leaders.

This section will walk you through the main quests and encounters leading up to and inside the Cultists' Refuge. The tactics presented are suggested by players like you and draw on extensive play experience, but are not absolute guarantees of success. As with all things TERA, player skill and a healthy amount of common sense are what you'll need to win—but we've included a few tips, too.

While you were fighting monsters and Lokians on the beach, Elleon and the rest of the task force pushed deep into the ancient temple complex known as the Dark Cathedral, and they haven't been heard from since. After some bureaucratic back and forth, you set out to meet Orlaith and Elsine in the southeast camps.

Orlaith and Elsine agree on one thing; Elleon was hot on the trail of a Scion priestess, whose name rhymes with Ak and Kia. Deirin, the teleport master, can send you deeper into the cathedral complex to get more information from Rendalf.

Prefect Rendalf doesn't have a lot of good news for you, but he can send you on to one of Elleon's arcanists, Runha. She's been holding open a portal that the task force went through, but doesn't think she can do so for much longer. Maoran, the teleport master, can help you get there, if you don't want to take the long way around.

While Ruhna appears the very model of elven calm, her report is sobering. A great deal of energy directed at closing the teleport link she's maintaining. In particular, Scion priests are channeling energy from three powerful monsters against her. They need to go, or she won't be able to keep the link open to the area that the task force scouted.

These BAMs have fairly standard tactics, but their location makes them a bit tricky to fight. Not only is each attended by a Scion "handler, " but the chambers they inhabit are patrolled by fairly tough shurian mercenaries.

Time your approach to avoid aggroing either the shurians or the Lokians patrolling the hallways. Extra combatants can chip away the outer edges of your defensive formations, and you'll want to bring as much damage to the table as you can.

Fimbrilisks jump, slam, and rend with regularity, but also have a damaging forward shout. If you've got a mystic or priest with you, have them ready to dispel a particularly nasty "bleed" attack. Standard BAM tells apply—there's one outside the Cathedral proper fighting a group of NPCs if you'd like to watch.

With the Fimbrilisks out of the way, Ruhna has one more task for you. She's been using a dimensional anchor to help maintain her teleport link to the task force, and while she can feel the connection strengthening, something's not quite right. Before she sends you through, she'd like you to check it out.

The hallways are just as full as ever, and you might attract a bit of attention on your way there. Once you're finished with any incidental combat, approach and activate the plinth.

Hydraths are tricky opponents, but if you remember the reapers from the Island of Dawn and Cliffs of Insanity, you know half of what you need to survive this encounter. Observe both the top and bottom "bodies" for tells, but also keep an eye on the rotating center blades. Both a "shotgun" attack and an electrical cone can end your adventure pretty quick.

Remember Rule #1: Don't get hit. The hydrath's tentacles slam down fast and hit hard. It will occasionally chase you around the room, but stick to your class's strengths and you should be fine.

Of note: The dark cathedral is an "open" area, and there's a chance someone else will activate the plinth while you are fighting Libtrixis. You do not want this to happen, as you will quickly find yourself fighting two of these creatures. The room will get very small very quickly in this situation.

NOTE: This quest is only available to characters level 37 and higher who have finished the previous quests in the plot. However, the dungeon strategy is the same whether or not you have the quest.

Ruhna can now maintain a stable connection to Elleon's advance team, and has a message from your friend and Elleon's friend, Jelena. True to his nature, Elleon has moved ahead of the rest of the task force, and possibly got himself into a bit of trouble. The remainder of his troupe has had their hands full while trying to find him, and need your help to clear a path to their leader.

The last person to see Elleon was Davina, a castanic scout. She was out on patrol when the doors came down, and there's been no word from her since. The fact that she's also Jelena's sister is cause for extra concern, but hey, that's why you're here, right?

And if you've got a little time...

The first thing you'll need to do is open the doors leading to the rest of the structure. From experience, the task force knows they are controlled by wardstones, the first of which is in the next room. Of course, it's not going to be easy.

The first wardstone is guarded by a flock of imps, a wraith, and a series of spike traps, so make your way to the center of the room as fast and as safely as you can. Don't worry about chasing the wraith around—it will float its menacing way back to you before too long. Wipe out the imps, avoid the spikes, and then activate the wardstone once the room is clear. The door to the east is now open, and you can proceed.

The first chamber you'll encounter is chocked full of skeletal figures with glowing balls of energy in their chests.

These are Ksharans, a particularly nasty form of undead used by the Scions of Lok. Fast, agile, and deadly, they can take down an unprepared group. On the bright side, they're standing next to barrels that EXPLODE when attacked. Ranged combat is recommended here, because the "mystic" skeletons make liberal use of Corruption Ring, and your HP belongs in your body for maximum effectiveness.

One last thing: at the far side of the room is an oversized skeleton. Attack this one last, as doing so will aggro everything in the room, and some of the enemies from the next as well.

With a little help from global chat, I got everything figured out. I dumped my starting gear and hopped into the armor set…

What Are Glyphs? Glyphs are minor skill enhancements players can use to customize their TERA experience. Starting at level…