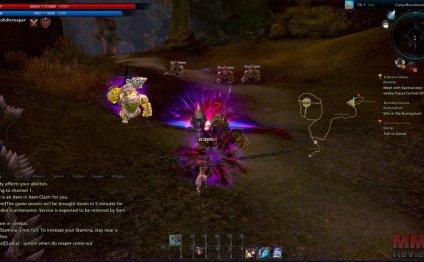 Though it's been modified for North American release, TERA was born in South Korea, and it shows. All the tell-tale signs of a popular Korean MMO are here: the pretty but generic fantasy setting, the heavy grind to the level cap, the anime sheen over the whole production.

TERA sets itself apart from previous Korean MMORPGs with its combat - you'll be hacking, slashing, casting spells, and dodging powerful blows from monsters with single button taps, and skilled players will learn to link all of the available moves together into impressive combos. While that combat system goes a long way toward making TERA worth checking out, it also illustrates just how boring everything around it is.

TERA's 15 gigantic zones are spread across two continents, Arun and Shara. As the game begins, the seven races of Arun and Shara have allied together to defend against invasion from an evil race called the Argon. That's about as much as I could tell you about the plot of TERA, and even that I had to double-check.

The game begins with a great (if confusing) concept for a prologue, jumping your chosen character ahead to level 20 and throwing you into the thick of the Argon invasion to give you a taste of what's in store. As you progress, story quests are peppered with cutscenes hinting at happenings, but the major players in the world of TERA fail to develop interesting personalities or backstory.

At least the story segments are a nice break from the mind-numbing mundanity of the rest of TERA's quests. Most MMOs have a predictable quest structure that only barely hides the fact that you're being asked to perform fetch quests or kill "x" number of monsters over and over; TERA, on the other hand, doesn't even attempt to mask its low ambitions. Virtually every quest involves either hunting a certain number of enemies in the area - often as many as 15 or 20 - or carrying an item from one quest-giver to another, sometimes being shuffled back and forth between two locations multiple times before you finish the quest chain. Nothing breaks up the repetition save for a handful of crafting tutorial quests.

The areas that quests funnel you through look good, though. TERA does some stunning work with Unreal Engine 3. Zones break down into exactly what you'd expect from a fantasy MMO - the zombie-infested swamps of Poporia, the vast desert of Val Aureum, etc. - but they contain highly detailed villages, ruins, and landmarks that lend a sense of history and life to the world.

The character models and animations in TERA are especially impressive, even if the seven playable races read like a checklist of Korean MMO stereotypes - demonic race, check, elf race, check, creepy child-like race, check. The blandness of those choices is almost totally redeemed by the inclusion of Popori, an adorable pint-sized race that mixes together rabbits, puppies, pandas, and any other cute animal you can think of without making the end result weirdly sexualized. As forgettable as much of the game is, I'm always going to think back fondly on my bipedal, sword-swinging pug - whose idle animations include a d'aww-inducing impatient dance.

The smooth animation serves a purpose beyond charm. In addition to the legions of regular foes you'll face, TERA's zones are wandered by world bosses known as "BAMs" (or Big Ass Monsters). These massive creatures can halve your health with a single attack, but their movements reveal tells that allow you to avoid damage entirely if you play smart.

BAMs provide the ultimate test for the TERA's fast-paced combat. In any other MMO, enemies of this size could only be defeated by a group or over-leveled players. In TERA, if you learn to play your class and read a monster's movements well enough, you can handle these beasts on your own. The game still recommends grouping when it sends you on quests against BAMs, but the exhilaration of slowly chipping away at one solo is worth the risk.

"I'M ALWAYS GOING TO THINK BACK FONDLY ON MY BIPEDAL, SWORD-SWINGING PUG"